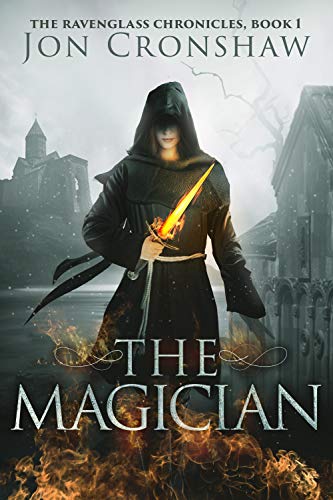 Kat is heir to the throne…

…but the last thing she wants to do is rule.

When the day she’s been dreading finally arrives, Kat is torn between her royal duties and a magical destiny.

Will she choose true love and risk certain war, or accept an arranged marriage with a man three-times her age?

With only a wyvern and a messenger boy as her friends, who can she really trust?

How deep do the secrets run?

Inspired by the tarot and set in a rich medieval world, The Magician is the first instalment of The Ravenglass Chronicles, a fantasy novella serial with new episodes released each month.

I loved Kat, and I felt so bad for her. She never really wanted to be a woman, she just wanted to keep being a child so that she would keep her freedom. Now, she has to go through an embarrassing “first blood” ritual, and then she must be engaged/betrothed to a random man from another kingdom. She does everything in her power to put off this ceremony, but her younger sister has already gone through the ceremony and her mother keeps pushing her to become a woman.

Cronshaw does a good job of showing how sometimes sisters can mature at different levels. Elizabeth was really too young to realize the trouble she was going to be in once she goes off with her betrothed, a much older man. But she feels that she is more mature and responsible than Kat, a girl who won’t let go of her childhood to become a woman. Kat knows more than Elizabeth, but she doesn’t want to play along to appease her sister or her mother. She will fight this ceremony until the last second and fight the betrothal even longer.

I hope that Kat is able to salvage her relationship with her younger sister. Her younger is going to need her help throughout or either to escape this marriage that is definitely going to hurt.

The romance in this book was sweet. It was very innocent, as Kat is still only in her early teens. I liked seeing the two have feelings for one another, but still trying to keep things secret to not get in trouble. I hope that they are able to continue the romance in future books, but this book ends on such a huge cliffhanger that I don’t know what could happen in future novels.

I would recommend this book to anyone looking for an upper YA fantasy novel with a coming-of-age storyline.