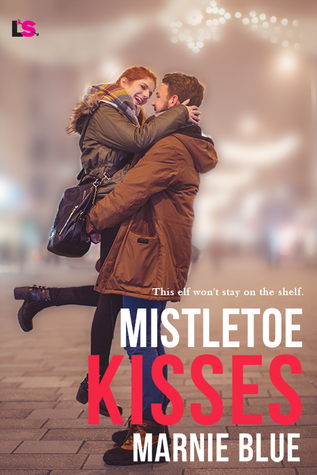 For Officer Justin Weaver, Christmas is the most hideous time of the year. To improve his “holiday cheer,” he’s been put on Officer Kringle duty, collecting toys for the Ho-Ho-Patrol.

It’s a week in holiday hell.

Worse, it comes with an elf—his little sister’s gorgeous best friend—but Lilly Maddox isn’t so little anymore. And as an annoyingly festive reporter looking to make her mark, she’s there to document his every move.

Justin’s always had a thing for Lilly, but he refuses to go there with her. Ever. Not after watching what his mom went through as a cop’s wife. But now that they’re trapped in his squad car, avoiding her just got a lot more complicated…

This was more of a Christmas read, but I am just getting around to it now!

This story is a very short romance novel taking place around Christmastime. The main thing is supposed to be that Lilly was Justin’s younger sister’s friend, but she went away at age 15 and they never really spoke again afterward. I had many issues with this sort of “hate-to-love” dynamic.

For starters, Justin had no reason to hate Lilly. She didn’t move after his dad died because she just had to escape the small town and get away from her best friend. Her parents thought that she was spending too much time with them and wanted her to focus on her studies, so they SENT her away. She did not choose to go away. Her friend literally forgave her! The school wanted her to focus and wouldn’t allow her to call home for the first few months. Justin says that she ran away so that she wouldn’t have to help her friends, but Lilly literally tried her best to go up against her parents in that situation. In the end, her parents are the authority, and they made the final decision for her. I don’t know how Justin just didn’t understand this.

Also, the story starts with Justin having some sort of PTSD from the war. I thought that this would be used throughout the story. Maybe he would be sad around Christmastime because he would be reminded of a Christmas he spent sadly while overseas. Maybe he would have a panic attack because of fireworks. But no. He’s just a jerk to everyone he meets. He treats everyone like he doesn’t have the ability to say a single kind word to anyone. This is not PTSD, this is just being a bit of an ass really. like if he said that he was emotionally detached because of anxiety or something that would have made sense, but he was just mean for no reason. It almost seemed like the story just wanted to make him “hotter” because he’s a military man instead of just doing the brother’s best friend trope, and then decided not to go all the way with it.

Besides these things, I did like Justin and Lilly in general. Maybe it was because they clearly had chemistry from the start of the novel? Maybe it was because of the sorta-cute Christmas storyline? I don’t know, but I didn’t completely hate them. I was happy when they found love with each other.

Overall, I would not recommend this Christmas romance, but if you just want to pass time with a cute short story, then this wouldn’t be the worst one to read.