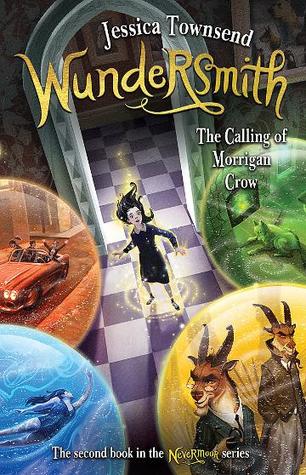 Morrigan Crow may have defeated her deadly curse, passed the dangerous trials and joined the mystical Wundrous Society, but her journey into Nevermoor and all its secrets has only just begun. And she is fast learning that not all magic is used for good.

Morrigan Crow has been invited to join the prestigious Wundrous Society, a place that promised her friendship, protection and belonging for life. She’s hoping for an education full of wunder, imagination and discovery – but all the Society want to teach her is how evil Wundersmiths are. And someone is blackmailing Morrigan’s unit, turning her last few loyal friends against her. Has Morrigan escaped from being the cursed child of Wintersea only to become the most hated figure in Nevermoor?

Worst of all, people have started to go missing. The fantastical city of Nevermoor, once a place of magic and safety, is now riddled with fear and suspicion…

I’ve finally finished reading this book, and boy was it good. I think I like this book even more than the first book in the series!

Morrigan Crowe has finally been accepted into the Wundrous Society, but that doesn’t mean that her troubles are over. Her status as a Wundersmith has to be kept hidden, as the only Wundersmith around is Ezra Squall, and he is evil. Her only teacher in the Wundrous Society just has her learning about how evil Wundersmiths are, and she doesn’t feel as if she fits in. Then her team is blackmailed into keeping her secret, and her own teammates start to turn against her. She doesn’t think that she will be able to ever fit in and become a successful member of the Wundrous Society, and she is also worried about taking her team down with her. Then, Ezra Squall pays her a visit.

I have to say that I wasn’t expecting this book to go the full “magic school” route, but I quite enjoyed it. The Wundrous Society is definitely strange and harsh, from the teachers to the other students. Morrigan already started off on the wrong foot by being a Wunderrsmith, but no one but her teammates knows that she actually is one. As long as no one finds out, she should be safe. But that doesn’t mean that the Wundrous Society will be easy to get through, as she struggles through the trials and classes that they throw at her team.

The book is fast-paced, but there is a lot of information on each page. I truly was immersed in this story as I was reading it, and it gave me the vibe of the early Harry Potter novels that I love so much. There also were no love interests or love triangle’s (so far). Nevermoore is such a unique and wacky world, readers will definitely get lost in it.

The character development was intense for this story. Morrigan is not used to communicating with other kids, and now she has her own Wundrous Society family to communicate with on top of her guardian. I hope that in the future books the team gets closer together, as it was only a few unforeseen circumstances that drew them apart in this book. I also wouldn’t mind romance, but I also don’t mind if it isn’t included. The focus is on Morrigan, not on who she is dating.

I’m not sure how long this series is actually going to be? It seemed like a trilogy when I first started it, but now there is so much information that I think it could definitely be longer. I will keep an eye out for when the next book comes out, and I cannot wait to read it!

I would recommend this book to anyone looking for a new YA fantasy novel with a strong female main character, unique universe, and awesome cast of characters.

2 thoughts on “Wundersmith: The Calling of Morrigan Crowe Review”