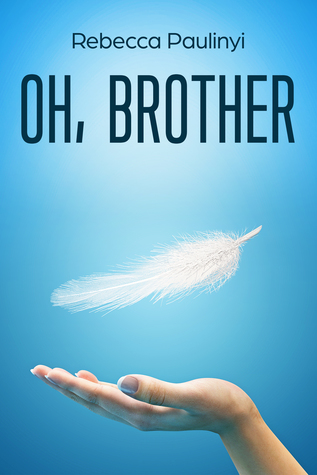 Lily Afton’s older brother is shot – but Lily can still see him. And hear him. And be irritated by him…

Lily has always been a normal teenage girl: good grades, a group of friends she has a laugh with and a crush on one of the cutest boys in school. Then her brother Sam is shot, and her whole world changes. The brother she’s argued with for fifteen years is now her constant companion, whether she likes it or not. And all around her, family and friends are being torn apart by grief.

As Lily tries to help Sam, hold her family together and keep up the façade of the grieving sister, being all things to all people starts to get too much. While people start to question Lily’s behaviour, one question hangs over the siblings: how long can the ghost of Sam stick around?

Lily doesn’t know why she can see the ghost of her brother. She didn’t even realize that her brother was dead until her parents came home, he was just sitting and watching TV like normal. She is the only one who can see Sam, and her parents are grieving immensely. Lily doesn’t want to feel like she isn’t being genuine about grieving, but she doesn’t feel as if her brother is gone, and her brother is constantly trying to reach out to her parents and make them feel better, even if they can’t see him. Lily doesn’t know how long Sam will stay, but she knows that she will have to help Sam figure out who killed him. She also has to keep her family together during their time of distress and help friends in school who also knew Sam.

This book definitely discusses how death affects the family. The book never truly explains why Sam was killed, only that he was killed, and focuses instead on how the family reacts to this news. Lily’s father tries to be strong, but he ends up seeming more and more distant as the story progressed. Lily’s mother never tried to be strong, but she became weaker emotionally as the story progresses. She goes through a lot of mental breakdowns as she deals with losing her son, and at least partially losing her daughter as her daughter becomes more distant. Lily goes through several stages of grief, and she isn’t able to fully grieve as her brother’s ghost is constantly around her. Lily’s family notices that she is acting strangely, and they try to send him to counseling, but Lily thinks that her parents are the ones that actually need counseling.

The story could have been fleshed out a little bit more detail-wise, but it definitely got the message across. I connected with Lily so much and was rooting for her and Sam the entire time! There was even a bit of romance with someone in Lily’s school, but it still stayed on a fun YA level.

My favorite part of the story was seeing Lily connecting with Sam’s girlfriend. She couldn’t see Sam so she was properly grieving, but she slowly warmed up to Lily and got to make a good friend. I wish that there was a sequel just about those two!

I would recommend this book to anyone looking for a new YA book about grief, romance, and friendship, with a splash of paranormal activity.