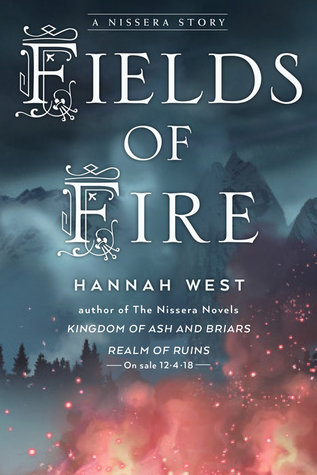 Across the land, the powerful sorceresses Bristal and Tamarice are marshalling their armies, readying for a climactic battle to decide the fate of their world. But in a hay-filled barn far off in the countryside, a small group of spies led by a courageous young warrior named Drell is about to launch an offensive in order to root out the identity of a shadowy alchemist. If Drell’s team is successful, one of Tamarice’s most dangerous accomplices will be destroyed. If they fail, the sorceress will come into possession of a weapon that could turn the tide of the war against them. Drell knows everything must play out perfectly for their mission to be successful, but even she cannot fathom the depths of the alchemist’s cruelty—or the sacrifices her own spies are willing to make to stop him…

In Kingdom of Ash and Briars, West wove together classic fairy tale motifs with her own lyrical prose and captivating characters to introduce the world of Nissera and the sorcerous powers battling over it. In Fields of Fire, we see another facet of that war—fought by ordinary women and men as well as powerful Elicromancers—setting the stage for Realm of Ruins… in which the peaceful future Drell and Bristal fought for so fiercely is threatened by a powerful enemy from the distant past.

I’m not truly sure how to even describe this novella? It was a nice short story, but it didn’t really add anything to the series for me. I didn’t remember most of the characters, even though some were from the previous novel. It was also far too short for me to really get any sort of story feel. I didn’t read the synopsis before reading this short story at the end of book 1, so I read it blind. When I read the synopsis when preparing to write this short review, I thought that I was reading the synopsis of a completely different book. It was so confusing.

I flew through the 20 pages, and then it was over. I’m not going to give this a rating, as I feel that maybe I missed something while reading this? But I am not going to try and reread this and make out some sort of a story. I still plan to read Realm of Ruins though, as this is a prequel to that book, and maybe I will enjoy it more!