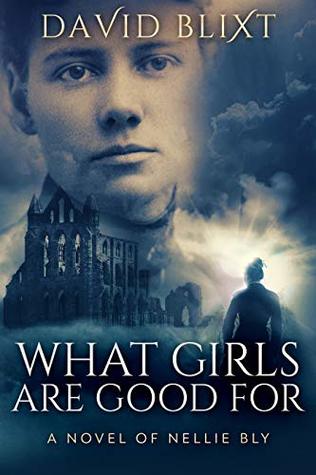 What Girls Are Good For by David Blixt
Publication Date: November 6, 2018
Creativia
Paperback & eBook; 535 Pages
Genre: Historical Fiction
Nellie Bly has the story of a lifetime. But will she survive to tell it?
Enraged by an article entitled ‘What Girls Are Good For’, Elizabeth Cochrane pens an angry letter to the Pittsburgh Dispatch, never imagining a Victorian newspaper would hire a woman reporter. Taking the name Nellie Bly, she struggles against the male-dominated industry, reporting stories no one else will – the stories of downtrodden women.
Chased out of Mexico for revealing government corruption, her romantic advances rejected by a married colleague, Bly earns the chance to break into the New York’s Newspaper Row if she can nab a major scoop – life inside a madhouse. Feigning madness, she dupes the court into committing her to the Insane Asylum on Blackwell’s Island.
But matters are far worse than she ever dreamed. Stripped, drugged, beaten, she must endure a week of terror, reliving the darkest days of her childhood, in order to escape and tell the world her story. Only, at the end of the week, no rescue comes, and she fears she may be trapped forever…
Based on the real-life events of Nellie Bly’s life and reporting, What Girls Are Good For is a tale of rage, determination, and triumph – all in the frame of a tiny Pennsylvania spitfire who refused to let the world tell her how to live her life, and changed the world instead.

Elizabeth never wanted to be looked down on for being a girl, and she spoke out against the many injustices against women during her time. Sometimes her family would actually get into a debate with her about the news articles that infuriated her, and sometimes, they would simply let her talk. But she was determined not to be silenced, continuing to debate. A letter to her local newspaper accidentally lands her a job as a reporter, and she takes pride in her work. Even as others try to bring her down, she perseveres to tell the true story of women in Pittsburgh.
My favorite part of this story was when she interviewed the factory workers. These female factory workers were looked down upon in society, considered to barely even be women anymore. The citizens of Pittsburgh didn’t even know that most of the women that were working in factories weren’t working there because they wanted to, but because they had to for their families or for themselves. Elizabeth spoke to them as a fellow woman and saw them as women when they felt invisible. Even when some admitted to drinking or sleeping with men for fun, she didn’t judge them but instead sympathized with them for having to resort to such things just to relax from their grueling jobs. She even spoke to the child laborers and the men that watched over everyone in the factory.
This book is full of short tidbits about Elizabeth’s journey to become Nelly Bly. I didn’t even know that Nelly Bly wasn’t her actual name, and instead was the name of a “colored” girl from a popular song of the time. I also didn’t know anything about her family situation, or anything she did before faking being mad to get entry into an asylum.
I feel that the synopsis of this book focuses more on things that happen later in the novel. You learn a lot about Elizabeth before she even gets close to entering the asylum, and that is why I like this book so much. You really get the full picture about her character without just jumping to the “exciting” parts of her life.

The plot moves quickly, but the book is still packed full of information. It does not feel short in any way, would be a great winter break read.

I would definitely recommend this book to anyone looking for a new historical fiction read.
I received an advance copy of this book and this is my voluntary review.
Overall Rating: 6 out of 5 stars

Praise for What Girls Are Good For
“Dramatic, engrossing, and spirited, What Girls Are Good For takes the reader straight to the heart of an unsung American hero–a feminist icon whose voice rings loud and true. This is a must-read for anyone who loves an underdog and celebrates justice; the perfect accompaniment for our present times.” – Olivia Hawker, international bestselling author of The Ragged Edge of Night
“With rich imagination and meticulous research, David Blixt has brought the hectic, exciting world of nineteenth-century journalism vividly to life. His Nellie Bly is determined, independent, crafty, irresistible — a heroine any reader would be delighted to get to know.” – Matthew Goodman, New York Times bestselling author

About the Author
David Blixt‘s work is consistently described as “intricate,” “taut,” and “breathtaking.” A writer of Historical Fiction, his novels span the early Roman Empire (the COLOSSUS series, his play EVE OF IDES) to early Renaissance Italy (the STAR-CROSS’D series) up through the Elizabethan era (his delightful espionage comedy HER MAJESTY’S WILL, starring Will Shakespeare and Kit Marlowe as inept spies). His novels combine a love of the theatre with a deep respect for the quirks and passions of history.
Living in Chicago with his wife and two children, he describes himself as “actor, author, father, husband. In reverse order.”