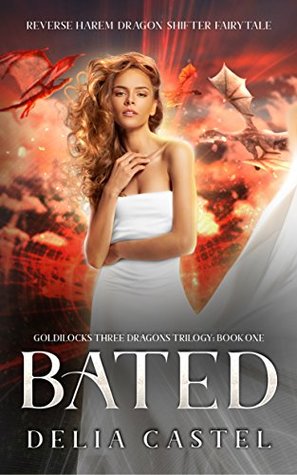 Can she use her feminine wiles to get out of this one?

Marigold has committed a crime that means certain death. Now she’s on the run from the shifters that want her hanged.

But Marigold’s luck turns worse when she’s captured by three handsome, dragon shifter brothers. Or does it?

If you like reverse harem fantasy stories, you’ll love this Goldilocks and the Three Bears retelling because it’s hotter than dragon fire.

Marigold thought that she was safe when she escaped being caught by the bears and made it to something of a shelter. Then she comes across the bodies of two dying dragons and gets blood all over her clothes as she tries to save their lives. In walk three dragon brothers, who only see their dead parents and a girl covered in their blood. They assume that Marigold killed their parents, and she has to prove her innocence. She knows that if she is turned into the authorities that they will see that she escaped prison and will send her right back to the bears.

I will start by saying that if you haven’t read the prequel to this series, Hated, it is really important that you start there. If you start with this book, you are basically missing the information leading up to Marigold stumbling across the dragons. Previous events are also mentioned throughout this book. It is free for Kindle and is fairly short, so just take a few minutes and read that one first.

That being said, I am loving this series! Marigold has such a unique backstory, and I can already feel her chemistry with the brothers. This book does focus on her relationship with only one of the brothers, but I can’t wait to see how the “harem” itself grows in future books.

The one thing that I liked about this novel was that the brothers are just as old as Marigold. In many of the other RH novels I’ve read, the main character is between the age of 18 and 20, and the men are all a lot older than her. Either they are in their late twenties, or they are magical beings that are hundreds of years old. This seemed to be a more age-appropriate matchup.

Also, I really enjoy the discussion of grief. Some brothers find it easier than others to find Marigold innocent, whereas others were blinded by anger and grief. None of the brothers were completely right or wrong in the conclusions that they jumped to, but the discussions that came afterward were important, and they allowed me to see what types of characters I would be dealing with for the rest of this series.

This is an action-packed and addictive tale, and I would recommend this book to anyone looking for a new reverse harem novel.