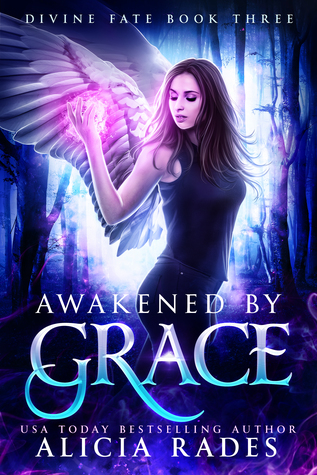 Ryn Tyler has finally fulfilled her destiny—but Eagle Valley is in more danger than ever.

After a victory that came at too high of a cost, Ryn’s sacrifices have paid off. Ryn has awakened Grace, the Davina who’s prophesied to save them all… but she’s not what Ryn expected. From the start, Ryn knows Grace is keeping secrets. But it’s worse than she originally feared, for Grace is hiding something that could mean the end of the world.

Ryn decides she has to discover the truth—even as war erupts in Eagle Valley.

Everything Ryn thought she knew about the magical world is wrong, but somehow, she and her friends have to make it right again. If she doesn’t, the home she’s come to love, and everyone in it, will be lost.

Ryn finally awakened Grace, but Grace isn’t what she seems. Ryn expected Grace to come back and save the Davina, and even though Grace wants to do something like that, Ryn isn’t sure if she is going about it in the right way. Something just seems too off about her, whether its the fact that she is a little more prone to violence than Grace was in the stories, or that some of the things she says don’t add up.

As this series comes to an end, I have to think back on the previous novels and see what has changed. Most things changed for the better, but some things got worse as the series went on.

For starters, I always mentioned Ryn’s relationship with her mother in all of my previous reviews. I always thought that Ryn acted like a brat towards her a lot and that her mother was just trying to keep her safe most of the time. Ryn finally has a bit of a breakthrough near the start of this novel and realizes what her mother was trying to do for her, and this really made me think that Ryn herself had FINALLY matured! This wasn’t even a major piece of the story, but it was huge for me.

One thing that I really thought deteriorated throughout the books was Ryn’s relationship with Marek. They started the series kinda liking each other, and I was looking forward to a whirlwind magical teen romance for the rest of the books. Instead, it fell a bit flat, and I couldn’t even see the fact that they were really a couple anymore by one point in the trilogy. Marek wasn’t even given that many lines in the majority of the novel. He just seemed to be there as the obligatory romantic interest, even though they had no chemistry. At least in book two, he trained her, in this novel he just seemed like a sidekick. As a lover of YA, I definitely did not need for them to be a couple.

The series did end on a good note. I was expecting the ending to be more anticlimactic than it was, so I was pretty satisfied with it. The fight scene was even really exciting, one of the most action-packed that I had seen in the entire series. There were one or two plot things that may not have been completely tied up at the end of the story, but most things were finished nicely. This book also seemed to move faster than the other ones in the series.

Overall, this wasn’t a bad YA fantasy trilogy! The world was definitely unique, and even though I didn’t like certain things in certain books, my overall experience was pleasant. I would still recommend this entire series to anyone who was looking for a new YA fantasy novel.