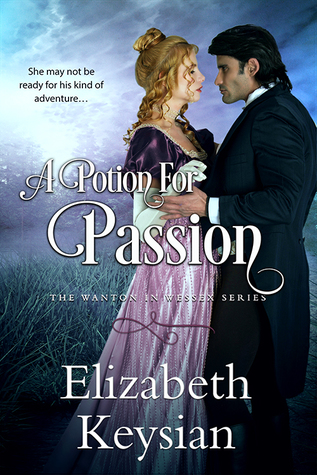 When Miss Flora Hartington bumps into a handsome traveling apothecary, she sees her chance at adventure, a brief escape from the shackles of propriety, and she jumps at the opportunity. It doesn’t hurt that he’s incredibly attractive, and kind in his own way. But it’s a temporary solution to her very big problem––namely her family trying to control her entire future.

Kidnapped by traveling folk as a child, Lawrence Campion yearns to be a real doctor, which means earning passage to America. The last thing he needs is to be saddled with the beautiful and feisty Flora. However, he’ll do whatever it takes to protect her, and then be off to fulfill his dreams. But Lawrence has a past that is quickly catching up with him. And he carries a secret that could destroy both their plans.

Flora has sworn off love and is determined just to leave town and be free. Then, the traveling apothecary Lawrence comes into town, and she tries to get some medicine to calm her frazzled nerves. She gets a lot more than she bargained for, as she starts falling for Lawrence and he starts falling for her. Lawrence has a bit more up his sleeve than simply being an apothecary. He likes Flora, but he doesn’t know if he should drag her into his life.

I have to say, it did take me a little bit of time to really get into these characters. But once I got into the characters, I fell in love with them. Flora was independent and had just decided not to love anyone anymore, but then she finds Lawrence and decides to give love a try again. Lawrence never got the chance to be loved, and he was always traveling. Lawrence just has to figure out how to break through Flora’s shell and get to her heart.

The plot moved smoothly, and it wasn’t as fast-paced as some historical romance novels are. I felt as if I really go to know the characters and were able to see their individual lives and personalities as I continued with the story. There was a lot of chemistry between the characters which is another thing that I missed from historical romance novels! These two truly loved each other, and the author makes sure that this is clear.

I can’t say too much about Lawrence’s true past, as it has a lot of spoilers, but I have to say that it was one of my favorite things about this story. He has such a complicated backstory that I couldn’t wait until more and more was revealed about him.

I would definitely recommend this story to anyone looking for a new adult historical romance/slight suspense and mystery novel to read.