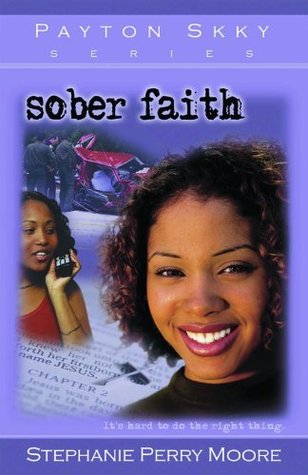 Payton Skky and her girlfriends are in their senior year at their Georgia high school and loving every minute of it. But the rest of Payton’s crew has strayed from God and continues to make bad decisions. While chasing after a good time, her friends begin experimenting with alcohol, drugs, and sexual sin. How can Payton help her girls turn toward God and away from those sins? Can she resist her own impulses to try things she knows are against God’s will? See if Payton discovers how to show her friends that true faith is sober faith.

This book definitely talks about the important teen issue of drinking. Payton just drinks because her friends do it, but when she sees how alcohol can make her friends crazy. But this wasn’t the best part of this story.

Payton still held herself on a pedestal above her friends for most of this book, but once she drinks, she starts to see things from her friend’s perspective. I felt that she definitely humbled herself in this story when she started to see herself in the same boat as her friends rather than just labeling them “sinners.” They all had to get past the peer pressure of teen drinking and get out of the dangerous situations that their choices had put them in.

Payton almost ruins her relationship with her boyfriend due to her drinking. He refused to participate in those activities, but by being with her, he could get in trouble as well. Honestly, I don’t see their relationship getting very far. Payton barely trusts him and expects him to be perfect, and he is pretty “perfect” for the most part. But, she isn’t perfect, but she puts stress on him to be. Also, I think he has either a bad past or something negative about him that is being hidden at this point. Something just doesn’t add up, and I don’t know what, but I definitely have a weird feeling about his character. Hopefully, this will be explained in future novels.

Again, I have to say that even though I don’t particularly like Payton, I do enjoy this series. It talks about real teen issues, and if you are able to overlook Payton’s holier-than-thou attitude, you will truly enjoy the books. It has even been a good reflection series for a Christian girl like me to see how I view people. I would hate to come off as being like Payton, and I’ve started to see how I sometimes judge people, from strangers to friends. Payton loves to judge people, but in this book, she got a shock when she realized that even she wasn’t perfect.

The book’s plot moved smoothly, almost like a television show rather than a book. It definitely has a lot of 90s vibes as the book was written in the 90s, but it applies to teens today. I would definitely recommend this book to anyone looking for YA teen Christian fiction with African American characters.