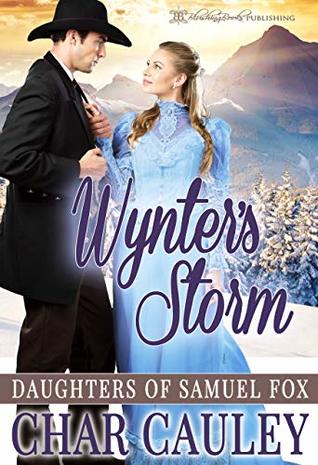 Children grow up. Feelings change. Or do they?

Samuel Fox’s granddaughter, Wynter, has loved Storm ever since she was a little girl. Their mothers are adopted sisters, and they have always been close. He has always protected her.

Will Storm be able to protect her now that they are older and life has become more complicated? Will he finally let Wynter know he loves her before it is too late?

Danger is all around them, and Wynter’s Storm is in the middle of it all, along with his pals, Lou and Gabe. Will the women in their lives trust them enough to listen when they warn them of the trouble lurking?

Oh boy. When I read the end of Autumn’s Doctor, I thought that Wynter would bring change to the series. She seemed to have a lot of attitude at only 5 years old, and she had an amazing artistic talent. All this story did was prove that the most talented girls with the most attitude can become airheaded fools over a boy.

When Wynter was 5 years old, a teacher molested her in front of Storm, and Storm protected her and the two of them got away together. This was just the beginning of Wynter’s troubles with being attacked. In this book she has this incident when she is only 5, her fiancee beats her to try to get money, and she is nearly kidnapped twice. She fights back every time and Storm doesn’t save her every single time, but this is a LOT of damsel in distress moments for a 170-page book. Also, one of the four times was literally out of complete ignorance. Storm was in danger due to his line of work and people were hunting them down, and he tells Wynter not to go anywhere without a bodyguard, and she decides to walk off without a bodyguard. After the first two I would have just started carrying a knife. This is supposed to be the historical country, it wouldn’t be uncommon. Oh, and these events are only the ones that she was beaten by men without Storm nearby. Storm and she were also ambushed, and she was nearly attacked by a bear before Storm came out of the nearby woods and shot the bear. I just, I couldn’t believe how many times Wynter nearly died in this book. It was just astonishing!

There was a power exchange in this novel, but I didn’t think it as bad as the last one. I also didn’t see any signs of abuse in this novel. There were the usual sexist ideals of “virgin women” compared to men allowed to sleep around, but this is usually prevalent in historical novels as a type of historical accuracy.

Overall, this book was more palatable than Autumn’s story. It flowed better, and I could actually see some chemistry between Wynter and Storm, and the other couples that were featured in this novel. If Wynter hadn’t been so annoying to get herself in danger so often, I probably would have actually liked this book! But when Wynter turned from a spunky 5-year-old into an airheaded 20-year-old who couldn’t follow directions even in life or death situations, I just had to cringe.