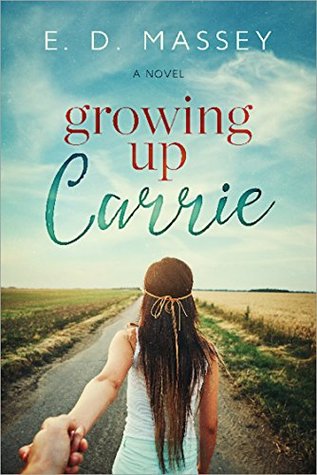 Families aren’t always perfect and neither was mine. When you add in a stepdad, there are more hurdles to jump over. It wasn’t always easy growing up after my stepdad came into my life. He met my mom on an Internet gaming site! Can you believe it? Later, he easily could have walked away from the responsibilities of raising a teen, yet he stayed and you won’t believe how it turned out …

I wasn’t sure what to expect when I started this book, but I was definitely shocked by what came out of it. Most of the book was told from the father’s point of view, which allowed the readers to see his relationship with Carrie’s mother and the events in her childhood through his more mature eyes. Rather than this being a book about Carrie growing up, it became a book about the father losing the woman he loved too quickly and dealing with raising a young girl as a single father. I think I loved this storyline even more than the synopsis’ summary of a different storyline.

For starters, let’s talk about how Edward and Tammy, Carrie’s mother, met. They were friends on a gaming site, and one day he receives a message that his good friend is sick. He flies from Arizona to West Virginia to see her and ends up becoming instantly attached to both her and her seven-year-old daughter Carrie. It was so unique how their relationship started, but it is actually not uncommon nowadays! I wish that more romance stories would start with more modern “meetings” such as this one.

Then, we get into the main part of the story. Carrie’s mother passes away, and Edward is left to take care of her daughter. He wants to do it, but he doesn’t know anything about raising a girl. Luckily, with the help of some family and friends, he i sable to bring the girl home and make her feel welcome/ready to start her new life in Arizona. Edward is so strong in this part of the story, as he barely gets to chance to mourn the love of his life before he is comforting her daughter and moving to his empty home.

This entire story deals with the different stages of grief. Edward doesn’t understand how a nice woman like Tammy was taken away so quickly, and her daughter who had never done anything wrong left an orphan. He can’t be weak because then Carrie would fall apart, but he struggles to see how the future will play out. Throughout the book, he relies on prayer to connect himself with Tammy and stay grounded as he raises Carrie.

The part of the story with Carrie’s growth is where Edward’s love truly shines through. There are several time skips as the book progresses from a seven-year-old Carrie to a seventeen-year-old Carrie. These time skips are never confusing and I loved seeing how Carrie would change both physically and mentally in each new section.

This story was amazing as it told how Carrie grew closer to her father, and they both overcame their grief together. I read it all in one sitting, and I would definitely read it again. The writing was smooth yet descriptive, and the entire book was just a roller-coaster of emotion. I would definitely read this one again, it is going into my permanent collection.

I would recommend this story to lovers of adult contemporary romance or adult family stories.