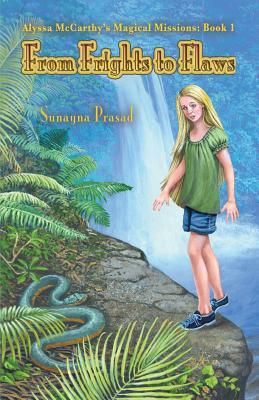 Twelve-year-old Alyssa McCarthy can no longer stand the toughness of her uncle and wants a better life. But one day she discovers not only the existence of magic, but also a villain hunting her down. The villain uses magic and magical technology to kidnap Alyssa to the Fiji Islands. As much as she wants to go home, she has to face some dangerous challenges first. Not only that, the villain himself must also be defeated. Can Alyssa succeed, even with the help of her mentors?

I have to admit, I DNF’ed this book around 40%. I really tried to push through, but this book was just painful to read.

Let me start with the writing. The dialogue feels stilted, and Alyssa seems unrealistic. She is supposed to be nearly thirteen years old but feels more like a seven or eight-year-old in the book. Every single time something strange happens, she just says that it is magic. When the adults say magic doesn’t exist and slap her or punish her, she gets sad for a minute or two, and then the cycle continues. You would think that a twelve-year-old would think to come up with some sort of excuse to try to get the adults off her back, but she just keeps saying the same thing over and over again. If the adults don’t believe in magic, she shouldn’t keep using that as an excuse for every single magical thing that occurs. It won’t change their minds.

Alyssa lives with her horrible uncle and her cousin who is in the same boat as she, but there is really no reason for her to have to live in that house. She mentions that there are grandparents that the cousin could go to live with once she has escaped to her godparents’ house, but if the grandparents are in the picture, why was Alyssa forced to live with the Uncle in the first place? Also, why was she forced to live with the Uncle if the godparents were in the picture? If her parents wanted her to live with her godparents if something happened to her, what happened?

Apparently, Alyssa and her cousin are homeschooled, but they aren’t really homeschooled. The uncle takes them to a tutor, and they share the tutor with other kids, including the bully that Alyssa was trying to escape when she left school. The uncle threatens them saying that they will get more homework from homeschooling in the next day, but he really has no control over how much work the tutor gives them.

There was supposed to be some backstory as to why the Uncle hated the children, but it was one of the dumbest stories I had ever read. Apparently, they gave their Aunt a box of chocolates one day, and one of the chocolates had a raspberry filling so she touched it without knowing and died. For starters, people with allergies are rarely that foolish. Even at 9 years old, when that event happened, I knew how to read the nutrition label to see if I was allergic to any of the ingredients. You’re telling me that the kids didn’t read it, and the grown aunt also didn’t read it? Also, if she was so allergic that just TOUCHING the chocolate would kill her, why would she even eat the chocolate in the first place? Any of those chocolates or even any chocolates in a company that MIGHT have raspberry filling could have killed her. The story just seemed thrown together and made me dislike the book even more.

Then when I got to the 30% mark, things started to go downhill. The writing worsened, and new characters were randomly introduced with no explanation as to why they were there. The story just seemed to say “weird things happen, its magic, adults hate magic, and magical people appear.” I couldn’t read anymore after the 40% mark, so I stopped trying to. I wouldn’t recommend this story to anyone.