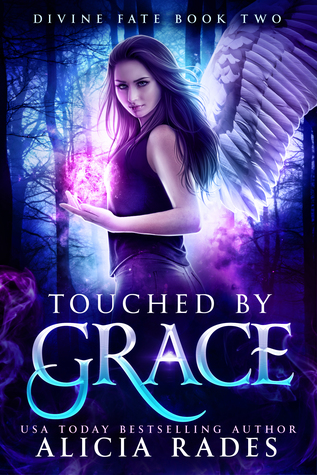 Ryn Tyler finally found her home—and demons are out to destroy it.

After a lifetime of searching for where she belongs, Ryn knows it’s in Eagle Valley… but war threatens to take that all away. Attending an angels-only high school should help her master her magical abilities, but stopping the upcoming battle is more important.

Ryn trains in secret with the help of her mentor, Marek, a bad boy who can’t decide between duty and love—and who’s already stolen Ryn’s heart. But the arrival of another Davina complicates things, and Ryn finds herself torn between the two boys.

Above all, she needs to find Grace. The ancient Davina warrior is Eagle Valley’s last hope.

The demons will do anything to stop Ryn from reaching Grace. Lives are on the line, and the future of the Davina—and the entire world—is at stake

The stakes are much higher in this book, as Ryn and her friends continue to search for Grace. Time is running out, but every time they take one step forward, they seem to take two steps back. Ryn is still training with Malek, even though her crush on him distracts her a lot, and she still has problems with her mother. The world doesn’t stop for one girl, but Ryn must juggle everything to save it.

I have to admit, the more I see Ryn’s relationship with her mother, the more I dislike her character in general. Even when she and her mother were trying to have conversations, she would just get up when things got difficult. She basically has no respect for her mother at this point in the story, and this is her biggest character flaw to me. Hopefully, this will be fixed by the end of the series.

Besides this issue, I did like this novel! I felt that Ryn truly took the training Malek gave her seriously, despite her distraction, and was determined to not be a damsel in distress. There was a bit of a love triangle in the story, but I didn’t mind it. The fact that she wasn’t dating either boy at the time really allowed me to just fly through the scenes without too much dislike of the main character. I also didn’t think that the love triangle took over the majority of the story.

The story moved smoothly as the characters were on an intense time limit to find Grace. New characters were introduced in this story as they all worked together towards a common goal. Even though the characters never tried to hide Ryn’s powers and heritage from her, she still has a lot to learn about their world. This book delves a little bit deeper into the more intricate parts of that world.

This book definitely ended on a very dramatic note, and I can’t wait to complete the trilogy in the next few days and see how everything plays out! This has been an exciting series, and I hope it will end on a high note.

I would recommend this series to anyone looking for a new YA paranormal romance/fantasy story to read.