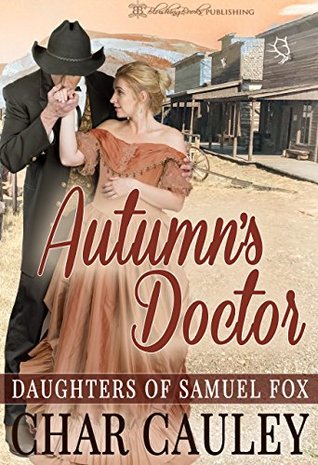 When tragedy strikes, will love survive?

Autumn has a mischievous way about her which often lands her in hot water with her husband, the doctor.
They long for a child, but when all seems perfect in their world, tragedy strikes, leaving her loved ones to wonder if she or her unborn child will survive.

Will their love overcome a smallpox epidemic, the illness of her beloved mother-in-law, and Autumn’s own tragic, freak accident? .

I have to say, I usually love historical romances. This one, however, I struggled to enjoy.

For starters, the book warned that there was going to be a power exchange between the husband and the wife. I was ready for this, and this part of the story didn’t bother me. What I disliked was how childish Autumn acted all the time. The other husbands said that they spanked their wives too, so I just got more confused. Were all the women in this story as immature as Autumn? I could understand if Autumn acted like a brat as a part of their dynamic during bedroom scenes, but it just seemed like being a brat was a part of her natural personality. I could not bring myself to like her.

For starters, she was upset that her husband missed their anniversary. Rather than being upset, she should have appreciated the fact that he was studying to take a test to be more certified for the people of the town and therefore more able to help them. He didn’t “discipline” her for this, but I just thought that she was being childish all the same.

Then, they are on the train for a trip that Jarod’s parents gave them, and she gets mad because she is “bored” sitting in the train car with the women while the men went into the smoking car. She could have told her husband that she was feeling lonely, but instead, she lashes out at him and ends up lashing out at his mother in the process. He disciplines her then, but I still think that there was no need for her to lash out that way.

There was another incident where she just completely jumped to conclusions and ended up hurting a person in the process. I won’t spoil anything, but after that incident, I just stopped trying to like her.

One part of the book actually scared me. An ex-girlfriend of Jarod was coming onto him at a party, even though he turned her down at every turn. Her husband appears to take her home and is “shaking her slightly, rage evident on his face” and says  “I will make you very sorry you embarrassed me like this.” They say that she started to look fearfully at her husband. Then a side event happens, and the couple goes home. Clearly, her husband was planning to beat her or hurt her in some way, but no one even CARED. They just seemed to be happy that the husband showed up and sad that the poor husband has to stay with his unfaithful wife. They don’t care that this husband could literally be going to abuse his wife. Even if they have some sort of power dynamic, the husband should not be taking his anger out on his wife as a part of their “power play.” The wife may have hurt her husband emotionally, but she should not be beaten because of it. They should just go their separate ways and be done with their relationship.

The only thing that really saved this story for me was the fact that I enjoyed seeing the families being created in this story. It seemed like all the couples in this book were either having or adopting children. I think I would like to see a future novel with the children all grown up and seeing their love lives. Even though I disliked Autumn in this book, I think I would like books about other characters.

I won’t recommend or not recommend this book, but if you think it could interest you, I would say give it a shot! It is fairly short.

I received an advance copy of this book from Booksprout and this is my voluntary review.