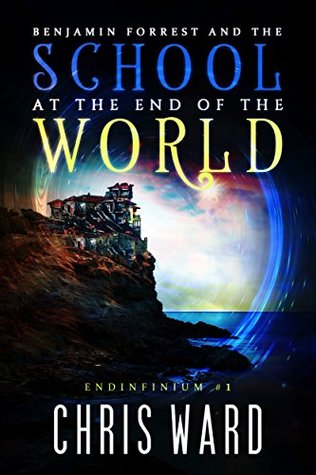 At the end of everything … there is a new beginning.

Benjamin Forrest wakes up on a strange beach. Two suns shine in the sky, and a couple of miles out from the shore, the sea drops off the edge of the world.

Where is he? How did he get here? And most importantly, how can he get home?

As he begins to encounter the unusual characters of Endinfinium, he finds himself at the centre of a battle for a secret world, one in which he will play a decisive role …

This book just throws you into the middle of the story without much of a warning. Benjamin Forrest wakes up a beach and has no idea how he got there, and you don’t know who he is. Then, the strange creatures of Endinfinium start to attack him, but a girl named Miranda saves him. He is forced to attend this strange school, but he doesn’t even know what this world is. Apparently, all the kids at this school have been taken from their homes at one point or another to go live their lives in Endinfinium, and there is no way home once you are there.

Most kids resign themselves to their fate, but Miranda and Wilhelm are always breaking the rules. They refuse to let the cold, unfamiliar world keep them from having fun. They are really good friends for Benjamin and help him with whatever he needs. There also was little-to-no romance in this novel, which was good because I believe that the characters were supposed to be in middle school/early high school. Romance or a love triangle at this point would have just been too awkward and strange.

In this world, almost everything lives. The book doesn’t really describe how this works too well, but it seems that many of the objects that are created in the real world are duplicated in this world, but alive. They have to constantly put the objects to “sleep” so that they won’t move all over the place and cause havoc. There also seems to be some sort of system of powers, but this isn’t explained either.

I have to say, it did annoy me a bit to feel as if I was stuck with the characters as they were trying to figure out the truth about the world. Sometimes, I like to know a little more about the characters and world than the characters in the story do. Nevertheless, this book keeps you on the same level as Benjamin, and if he is confused, you are confused as well. I expect things to be explained later in the series as some secrets were revealed at the end of this book, and it ended on a cliffhanger that would be continued in book 2.

Other than the above problem, I didn’t have any other issues with this book. It was a pleasant read, and I can’t wait to see how Benjamin and his friends grow in the next two books of this series. This world is unique, albeit strange, and I want to learn more about it as soon as possible.

I would recommend this book to lovers of YA fantasy who are looking for stories set in a new world.

I received an advanced copy of this book from Booksprout and this is my voluntary review.