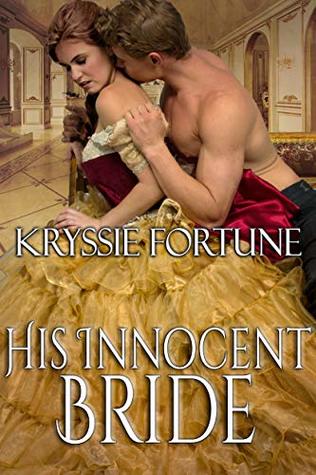 Going about her mundane life in a small fishing village, Alethea never dreamed she would end up with a man like the Earl of Deanswood, yet when she caught the handsome gentleman’s eye he wasted no time in making her his wife. Unbeknownst to Alethea, however, her conniving mother has convinced Deanswood that she has no interest in the marital bed. Devastated by his seeming disinterest, Alethea searches for someone to instruct her in the ways of enticing a man.

When a friend informs Deanswood of Alethea’s plans, he decides to train his new bride himself. Soon enough, Alethea finds herself naked, blindfolded, and helplessly bound as she is thoroughly spanked and then brought to one blushing, quivering climax after another. But when Alethea’s life is threatened by her mother’s vicious scheming, can Deanswood protect his innocent bride?

This is not the type of historical fiction novel that I would normally be into, but I saw the author promoting this book on Twitter and decided to give it a try!

Alethea is a very naive girl. She is very sheltered and knows little to nothing about what goes on behind closed doors with a man and a wife. She is lucky enough to have escaped the area where she grew up, where a woman could be driven to suicide for being found in a compromising position with a man, but she still has those poisonous thoughts in her head. When her husband doesn’t come to her bed on their wedding night, she is sure that she has done something wrong, and she wants to find out how to do things properly so that her husband would be interested in her.

At times, I think Alethea was a little too naive. Even if she didn’t know anything about sex, surely if she had any brains she wouldn’t have thought to just go to a random “seedy” place to try to find an instructor. A plethora of horrible things could have happened to her, but the author finds ways to still allow her to be foolish and have a happy ending. I think that the story definitely makes you feel for Alethea, even when she is putting herself in direct danger.

The plot of this book did move very smoothly and I found myself finishing it in one sitting. The point of view does switch when the plot requires it to, but it is not confusing and does not draw away from the main storyline. I was even able to tell characters apart, which can be difficult in a historical romance novel where some things just seem to meld together.

I also appreciated the fact that this novel was on the longer side. I didn’t feel as if I had been cheated out of the storyline, and I didn’t feel as if I was reading shell characters. Each character had their own individual personality, and actions that fit that personality. Besides being worried about and annoyed by Alethea’s naivety at times, I truly enjoyed reading this novel!

I would recommend this story to anyone looking for a historical romance novel with non-vanilla romance scenes and an addictive storyline.