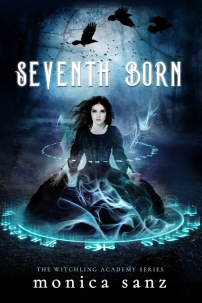 Abomination. Curse. Murderer. All names hurled at eighteen-year-old Seraphina Dovetail. As the seventh-born daughter to a witch, she’s the cause of her mother losing her powers and, in turn, her life.

Abandoned as a child, Sera dreams of becoming an inspector and finding her family. To do that, she must be referred into the Advanced Studies Program at the Aetherium’s Witchling Academy. Her birth order, quick temper, and tendency to set things on fire, however, have left her an outcast with failing marks…and just what Professor Nikolai Barrington is looking for.

The tall, brooding, yet exceedingly handsome young professor makes her a proposition: become his assistant and he’ll give her the referral she needs. Sera is quickly thrust into a world where witches are being kidnapped, bodies are raised from the dead, and someone is burning seventhborns alive. As Sera and Barrington grow ever closer, she’ll discover that some secrets are best left buried…and fire isn’t the only thing that makes a witch burn.

Purchase links can be found HERE!

This was definitely one of the best dark fantasy novels I have read in a long time. Even though it was fairly long, I finished it all in one day in about 2 sittings. It was just that addictive!

For starters, let me talk about Sera. She has been through a lot as a seventhborn and has traumatic memories from some of the things that she went through earlier in her life. This is also discussed throughout the story, as she has to come to terms with some of these horrible memories. She meets Professor Barrington and is not sure whether or not she wants to help him. Soon, she is drawn into the world of witches being drained and used to raise others from the dead, and some of the links seem to trace back to her school, the place where she has felt trapped for several years of her life. She wants to be able to avenge the witches who had been killed, but she is afraid of getting close to Professor Barrington. What if his intentions aren’t as pure as she thinks that they are? She must learn to trust again before she can enhance her skill and make sure that no other witches are killed.

The only thing that I felt wasn’t explained was why women chose to have seventh children. If they knew that having a seventh child would kill them and leave their families motherless, why would the family not just stop at 6? I’m sure there is probably some sort of reason behind this, but I might have just missed it as I was reading the story.

I enjoyed the romance that was in this story, even though there wasn’t that much of it. I felt that it allowed the readers to focus more on Sera’s character rather than who she wanted to be with. She was such a strong character that I just wanted to read about her without too much distraction.

I hope that there is going to be a sequel to this book, I need to know more about Sera and Professor Barrington ASAP! I have officially fallen in love with the both of them and I want to see more of their future adventures.

Also, I didn’t notice this until I saw the author, but even though Sera looks “white” on the cover, her ethnicity isn’t really specified in the book. This definitely makes it easy for readers of all ethnicities to related to her and enjoy this book even more!

I would recommend this book to lovers of NA/upper YA fantasy novels with detailed universes and strong female main characters.

Monica Sanz has been writing from the moment she could string together a sentence. Her stories have come a long way from mysterious portals opening in the school cafeteria, transporting classmates to distant worlds. A classic by the name Wuthering Heights is responsible for that. She’s been lost to dark romances and brooding fictional men ever sense. Now she writes about grumpy professors, cursed ringmaster, tortured soul collectors, and the girls they fall in love with. Monica’s books have received many accolades on the social writing website Wattpad. She’s accumulated over six million reads, eighty thousand votes, and fifteen thousand comments since posting her books on the website. She is also a member of the Wattpad4, a group of writers who host weekly Twitter chats on the subjects of writing and publishing.