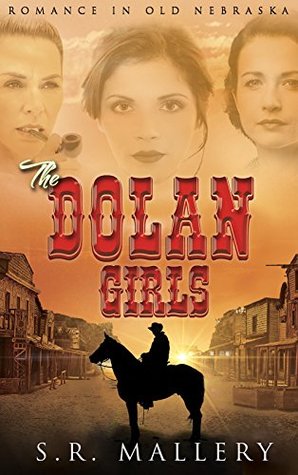 The Dolan Girls by S. R. Mallery has it all. Set in Nebraska during the 1800s, whorehouse madams, ladies of the night, a schoolmarm, a Pinkerton detective, a Shakespeare-quoting old coot, brutal outlaws, and a horse-wrangler fill out the cast of characters. Added to the mix are colorful descriptions of an 1856 land rush, Buffalo Bill and his Wild West Show, Annie Oakley, bank/train robberies, small town local politics, and of course, romance. Two, in fact!

Cora is in love with Thomas, and they are planning on getting married soon. Then, his horrible stepbrother rapes her and leaves her with a child. Thomas goes into the military, so Cora is left with her sister Minnie to raise her child by herself. They own a brothel for money, but Cora is worried that her daughter will not learn how to be a proper woman in this environment.

Ellie is never really close to her mother, and when she is ten years old, her mother sends her away to a girl’s boarding school. She returns and it is like nothing has changed. Neither her mother or her aunt have found love, and the brothel is still succeeding. Ellie’s rebellious streak never truly ended though, and things are about to change in her life forever.

I don’t read that many Western romances, so this was a new thing for me to enjoy. Actually, even though I thought it would be mostly about romance, by the time I got to the first time-skip, I realized that it was going to be mostly about family growth. This was actually a better way to tell the story, as Cora needed her sister and daughter more than she needed a husband or another man in her life. Mallery does not show her getting attacked one minute and being fine the next, because this simply is not realistic for victims. She needed the support so that she could heal herself, and her sister gave her that support.

I also love that this story showed successful women owning a business in the “Wild West.” Of course, a brothel is usually not considered a business. But in this version of the brothel, Cora and her sister run a “respectable” business. Well, not necessarily “respectable,” but it was just a way for women to earn a living not some sort of slavery that the workers were forced into. They ran a tight ship, and it was a successful business. The more I learned about Cora and Minnie, the prouder I was that they didn’t just succumb to their circumstances and instead decided to be successful.

Even though I usually dislike and get lost with time skips in novels, I loved the time skips in this book. It allowed us to see the times when Cora and Minnie were young adults, see Ellie’s childhood at different stages, and then see the group when Cora and Minnie are older and Ellie is a grown woman. These made for such an amazing reading experience, as the plot moved slowly enough to truly see the family grow closer together. The character development was intense, and I loved every second of reading this novel.

I would recommend this book to anyone who loves genuine historical fiction and stories about strong women.