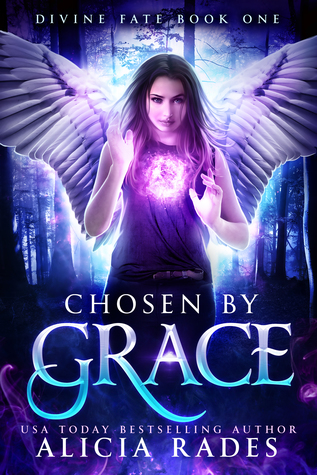 She thought the demons were in her head… until the night they attacked.

Ryn Tyler didn’t intend to kill a demon when she moved to Eagle Valley—or to become the hero of a divine race of angels. She just wants to be a normal teenager, but fate has other plans.

While discovering the secrets of the supernatural, Ryn navigates a complicated relationship with Marek, the guy who can’t stop saving her life. But Marek knows more about Ryn’s magic than he’s letting on.

Only Ryn has the power to stop the coming apocalypse. But there’s a demon in Eagle Valley who wants that power for himself—and if Ryn wants to survive, she’ll have to fight back.

This book puts an interesting spin on the “Chosen One” trope, and eliminates the things that I usually hate about it. Marek, the main male love interest, always cared about Ryn. He never pretended to hate her or kept things from her to “keep her safe,” but instead treated her like a capable magical being and trained her.

The other thing that I enjoyed was that Ryn’s mother didn’t just give her daughter up and allow her to just leave and join the magical crew. She was still wary of what was going on, to Ryn’s disappointment, and didn’t just stop parenting like most YA parents do. It made Ryn feel like a true teenage girl and not some sort of super-independent teenager.

I’ll have to admit, it took me a bit of time to get into this book. Nevertheless, by the time I got the middle, I was completely drawn in. I think that the scene that really stood out to me was when Ryn was learning how to take out and retract her wings, and how to fly. I almost never, and I mean NEVER, have dreams about the books that I am reading. Somehow, I managed to have a dream about flying last night when I had started writing this review, and it almost parallelled the book experience. It was also a really awesome dream. Coincidence? I think not. The flying was definitely one of my favorite parts of the book.

I appreciated the fact that Ryn knew some things about the magical world before becoming an Angel. Of course, she didn’t know exactly how to do things, and mostly just used her powers by accident. She had been seeing the demons for years though, and so she wasn’t one of those characters who blatantly denies that they are special and causes extra trouble. She wasn’t completely calm, but she didn’t do anything dumb.

I am definitely excited for the next book in the series! I hope to binge the rest of the trilogy over the weekend so that I can find out how Ryn changes in the future novels. This book just moved so smoothly after the beginning that I found myself speeding to the end. Since I have the box set, I almost started flowing right into the second novel in the series before I realized that I had finished the first!

I would recommend this to lovers of YA urban fantasy with characters that aren’t boringly typical.