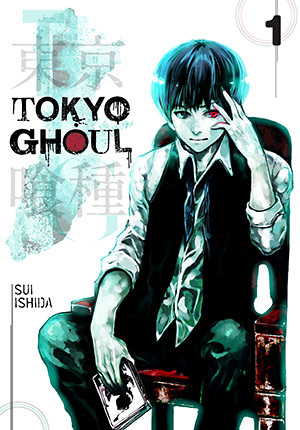 Shy Ken Kaneki is thrilled to go on a date with the beautiful Rize. But it turns out that she’s only interested in his body—eating it, that is. When a morally questionable rescue transforms him into the first half-human half-Ghoul hybrid, Ken is drawn into the dark and violent world of Ghouls, which exists alongside our own.

To be honest, horror/dark action manga are not really my thing. I much prefer romance manga or slice of life that might have a side action/adventure story. Nevertheless, an old friend recommended this manga to me about a year ago, so I decided that I might as well try it over the summer.

Within the first few pages of this story, I knew that it was going to be one of the darker stories that I might not like. I decided to finish the volume, and yes, it definitely was darker and gorier than I usually read. It was very interesting though.

Ken was not a ghoul. He was a normal human boy, until he went on a date with a mysterious girl and was almost turned into her food. When he is rescued, he needs an organ transplant, and the dead girl seems to be the most viable option. Now, he is both human and ghoul. He doesn’t want to eat humans, but if he doesn’t, then he will end up randomly attacking people.

I think that this manga does a good job of discussing the issue between good and evil. Ken always thought that the ghouls were the villains, but he never thought of things from their point of view. Sure, they have to eat human flesh, but no one truly desires to be a ghoul. I feel like the details of the ghoul world will also be expanded upon in future volumes, but this book does start to delve into some of the main issues.

Also, it was almost scary to see how many ghouls inhabited the human world. Some ghouls were too loud about their killings and made the news, but most ghouls live with humans in the normal world. They still eat human flesh, but they have learned how to control their other ghoul traits.

The one thing that I didn’t like in this story was the fact that the ghouls were not very welcoming to Ken. If they wanted to continue living in general secrecy and making peace with the humans, they should have explained to Ken the details of his new life. If Ken had just gone on a killing spree and revealed the ghouls that he had met in regular life, it could have been horrible for the ghouls who had been trying to live peaceful lives. Instead, most of the ghouls hated Ken, and then only a few helped him in small ways. I could understand that they don’t have pity on him because he got to be “partially” normal, he’s still stuck as a ghoul, and they needed to help him for their own safety.

Overall, even though this story was dark, I liked it. I think that I might even continue with this story, just to learn more about the other ghouls in Ken’s world. I think I could even get over the goriness if this story continues to be so interesting!

I would recommend this book to lovers of dark manga with strong stories.