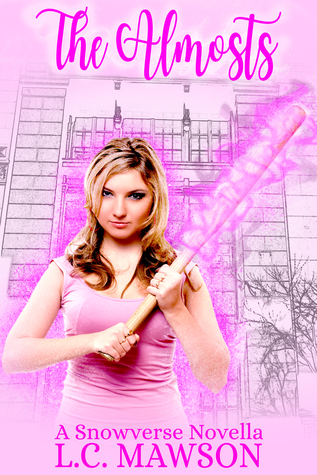 As I am waiting patiently for the next Freya Snow book to come out, I am going to take some time to review a few of the novellas in the universe and read a few of L.C. Mawson’s other books.

Kara was autistic and good with computers. She is caught at a bank heist and is able to unlock the keypad without even thinking about it. Then, she is randomly fired from her job due to her past as a hacktivist in college. As she is trying to find a job, a woman comes to her house, admits that she was the one to leak the information about her past, and offers her the chance to have a more unconventional job. She will join the woman’s heist crew and go on adventures beyond her wildest dreams.

Even though it took me a bit of time to actually like Kara, I ended up wanting her and her team to succeed. I really thought that some important issues were discussed in this book. For one, it discussed the lack of women in the computer science field, and it even touched on the fact that even though autistic people may be hired for a job, they may never be truly accepted by their bosses and coworkers. Thirdly, it even touched on how the “magical seduction” sex scenes should not be glorified in books but treated as rape. If the character didn’t truly have control over themselves when they slept with them but were drawn to a character for magical reasons, they did not fully consent to the act. I wish more female authors would touch on this!

The only thing that I didn’t quite agree with was the end. I can’t really say anything because it includes major spoilers, of course. I will just say that I thought Kara was far harsher than she had to be. I hope that she won’t be like this in the other books, because I don’t like her that much now and I would hate to have to really dislike anyone in Snowverse.

The flow of this story was really smooth, and the setting was unique. I think that there could have been a little more description in certain scenes as I struggled to visualize the scenery. Nevertheless, this is a novella so I will expect some of these kinks to work themselves out once I get further into the trilogy.

I would recommend this book to anyone looking for a fantasy-action-thriller with diverse characters and a fast-paced storyline.