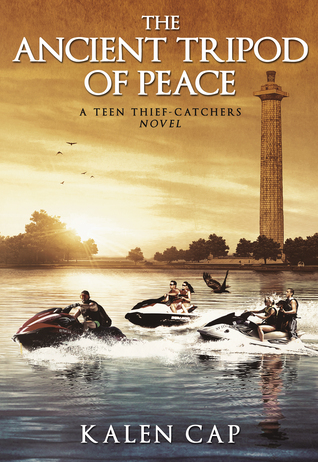 Plagued by loneliness in her Lake Erie Islands community, vegan Lexi hopes to make like-minded friends in high school. But her dad’s job is jeopardized when relics are stolen from his museum, changing her priorities. And she finds her new teachers’ eerie dislike of her troubling.

His dad in jail, cipher enthusiast and bacon-loving Gil hopes freshman year will provide a clean slate. Soon, he discovers secret codes within a Shakespearean play while paired with Lexi, pulling him into an ancient mystery.

With the official museum burglary investigation stalled, the mismatched teen sleuths join forces to try and crack the case. Lexi’s inquiries and Gil’s codes capture their teachers’ attention. But these teachers have the stolen Tripod of Peace, a powerful relic sought by rival secret societies. Caught in these societies’ crossfire as thieves wield an instrument of astounding power, Gil and Lexi are in danger.

The Ancient Tripod of Peace is the first book in novelist Kalen Cap’s Teen Thief-Catchers Series. If you like stories with artifact treasures, fighting secret societies, and spirited protagonists, you’ll enjoy this novel.

There were several problems with this book, but I am going to start off with the characters. The characters in this novel were generally uninteresting. I did not feel much of a connection to any of them, even when their stories were supposed to be interesting. It is imperative that a mystery novel have relatable and creative characters because some of the clues can lie in the characters themselves. However, this is not the case for this book, because 2 weeks after reading the novel, I would not even be able to recall the names of the main characters without some help from the notes on my phone.

The book starts off with a boy who is a steroid dealer trying to pay back his supplier, and having to steal to do so. By stealing from a museum, he indirectly harms a nice teenage girl, and so he decides to go back and try to fix things. This would not be received from the synopsis that I got from Goodreads, which only focuses on Lexi. I did not even feel that Lexi was the main character of the novel, and didn’t even remember her joining the plot until the story was well underway.

The world-building was also a bit lack-luster. I could not visualize any of the scenes. The book was about an ancient “Tripod”, but I still do not understand what the object is supposed to look like. I finished the novel, but I am still thinking of a camera stand every time the book discusses the object. It is simply not described enough for something that has been created for this universe. The secret society even seems split in their own morals, so I could not even really tell where that was going.

The only thing that I can say is that the pacing of this book was alright! It wasn’t too slow, and I was able to finish it in between schoolwork, and it still kept my attention fairly well. The story was pretty unique and had its own quirks, but it felt more like a fantasy story with poor world-building than a mystery novel to me. I can’t recommend it to mystery lovers, but some people might still enjoy the novel. I would recommend it to people who like books about Pythagoreanism.

I received an advance copy of this novel and this is is my voluntary review.

One thought on “The Ancient Tripod of Peace Review”