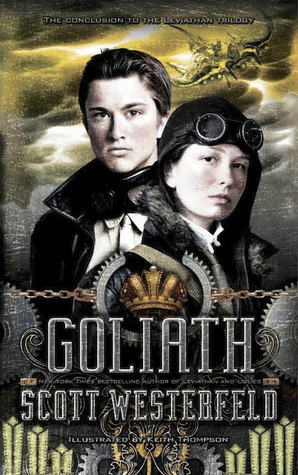 Alek and Deryn are abroad the Leviathan when the ship is ordered to pick up an unusual passenger. This brilliant/maniacal inventor claims to have a weapon called Goliath that can end the war. But whose side is he really on?

While on their top-secret mission, Alek finally discovers Deryn’s deeply kept secret. Two, actually. Not only is Deryn a girl disguised as a guy…she has feelings for Alek.

The crown, true love with a commoner, and the destruction of a great city all hang on Alek’s next–and final–move.

Alright, so if you know me, you know that I rarely use the Goodreads summaries in my reviews. I would much rather actually write my own summary. Problem is, with this book, I have no idea what I just read.

I feel that for the last book, the main plot was just dropped for the sake of the pointless romance. Why Deryn would fall for someone like Alek, I don’t know. I was always hoping that they would just remain friends, or that Deryn would actually fall for a girl. However, the romance was the least of my problems. It was probably the only thing that kept me going through this mess of a book.

This book consists of the Leviathan traveling to random places throughout the world for random missions. Don’t ask me what those missions were, because I wouldn’t know. Each one seemed unimportant, the characters weren’t memorable, and the storyline just seemed to drag on and on. This book was 600 pages, but it took me 3 months to start it and then 1 week to finish it. I should have been able to read it a lot faster, but I couldn’t even pay attention to the story.

Also, the storyline of people finding out that Deryn was a girl was so over-exaggerated. I don’t think that she could have been with the Leviathan for so long without people suspecting something, so it shouldn’t have been that much of a struggle. Also, without the reporter, it wouldn’t have even been that big of a deal. Her being a girl would not affect her fighting ability, as they would know since she had been on the ship for months. I know that it had to be a big deal for plot effect, but in reality, there could have been ways around it. This just made the plot feel even longer, as it was being held together by random trips and  “DERYN’S A GIRL!”

In the last 100 pages or so, I felt that the real plot of the story finally came out. It had nothing to do with the trips that they had made beforehand. I won’t spoil anything, but it wasn’t even a very satisfying end to the trilogy. It definitely wasn’t worth the 500 pages I had to struggle through beforehand.

Overall, I would advise that you just not read the last book of the Leviathan trilogy. If you are interested, read the first two books. Even though the 2nd book isn’t an end, it’s just not worth trying to get through this one.