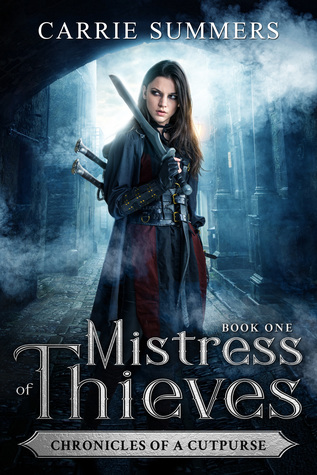 Myrrh is a freelance thief, and her mentor was captured by the city guards. When her mentor is killed, she has to find out who betrayed him before she comes to the same fate. She is double-crossed by a fellow freelancer, sold to a new crime syndicate, and delivered to the lair of the boss. At first, she believes that she will be killed, but the boss, Glint, has other plans for her. Soon, her ideas about the cities underworld will be completely changed, as she is swept into Glint’s syndicate.

I was expecting really great things out of this book, with the premise of a strong female main character and an action-packed plot. This book definitely delivered in the character department and the action scenes! By the time I started reading the middle, I couldn’t put it down and found myself flying through the rest of the novel.

The pacing of the story after the beginning was fluid, and the world, in general, was well-written. I didn’t see as much description of the crime-filled universe as I would have liked, but the times where everything was described fully were not disappointing. I didn’t see a single formatting or spelling errors to pull me out of the story, which is impressive!

Most of the characters had unique personalities, and those who didn’t were mostly just unimportant side characters.

I got a lot of Six of Crows vibes from this story. I’m not sure if I’m the only one, but if you are a fan of Six of Crows, I would definitely ask you to pick this book up and see what you think.

I would recommend this book to anyone looking for a new fantasy/mystery read with a strong female main character in a Six of Crows-like universe.