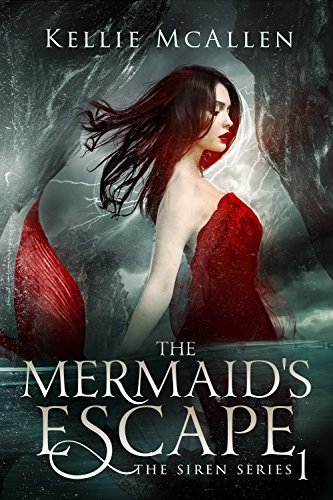 I have reviewed this book before as a part of the Sirens and Scales Box Set, but now it is being released as an individual novel! I am so excited to have been able to re-read it, and I can’t wait for book 2!

Coral is a princess of her grandfather’s kingdom. Her parents have passed away, and she is meant to marry her friend Kai. She wants to look forward to her marriage, but she knows that Kai will never love her because he is in love with her best friend Meribel. On her wedding day, she runs away to the surface, scared of spending the rest of her life chained to someone who she doesn’t love. She doesn’t know when she is going to return to the water, but she knows that she can only survive out of the water for 5 days. When a ship crashes, she saves 4 men from the ship. While they try to survive on the island, she decides to help them, and she finds herself falling for all four of them just like her mother fell for a human many years ago.

This was officially my first reverse harem story, and I have to say that I enjoyed it a lot more than I thought I would. The story wasn’t completely based on sex, but instead, it had many sweet moments as Coral built a friendship along with a relationship with the men.

In many reverse-harem novels, the girls seem to be rather flat while the guys are the only ones with personalities. This is not the case in the Mermaid’s Escape. Even when Coral can’t communicate with the boys, her bubbly yet stubborn personality shines through, and she is always useful in her own way. This doesn’t mean that the boys don’t have their own identities though. Each of the four men has a distinct personality that grows with Coral’s interactions with them.

I still can’t wait for the next book in this series, and I hope to be able to read it soon! Coral’s story must be continued.

I would recommend this story to anyone looking for a romance story with mermaids, even if they aren’t used to the reverse harem genre.