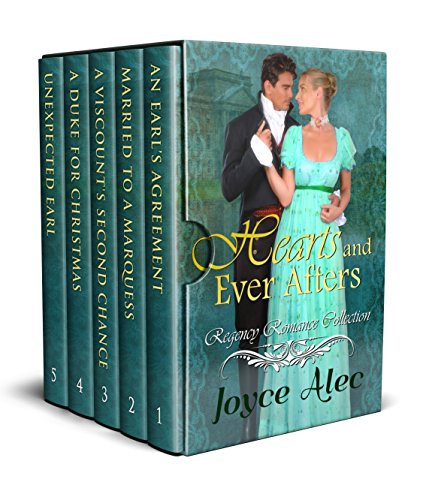 I read every single book within this box set, so I am going to write a short review for each and then average out the ratings for a box set rating.

Lucy does not wish to marry Lord Hutton, a very old man. Instead, she betrothed herself to Lord Caldwell to escape the situation. Everything seems to be going well as Edward and Lucy start to fall for each other, but Lord Hutton is not willing to give up his prize so easily.

Lucy and Edward’s relationship was so sweet, even if they started out as not knowing each other and only getting engaged for convenience. I also thought that Lucy was one of the strongest women in this box set, which was a change from the usual “damsel in distress” regency romance girls.

Married to a Marquess

Alice married William, but after the wedding, she has not seen him for three years. She decides to disguise herself and find out what her husband has been up to. Hopefully, she will be able to finally be free from his control.

I have to say that this story was probably my least favorite in the box set? I know that this is supposed to be regency romance with happy endings. However, if Alice had been strong, she would have left William and gone on to make her own life. I think I would have enjoyed this book better if it had been William searching for his long-lost wife and accidentally falling in love with her. The way the plot went was not completely uninteresting though, and I didn’t absolutely hate reading it.

Henry has lost Eleanor before, but he is determined not to lose her again. Another man is vying for her affections, but there is something fishy about him. Soon, a friend of Eleanor’s is blamed for a robbery, and Henry must assist Eleanor and her friend in getting out of the situation. Nevertheless, his reputation precedes him, and he must work twice as hard in order not to lose the woman he loves.

I enjoyed this story because it showed the fact that not everyone who is rich in these romances may actually be good people. There were liars in history as well, but sometimes they are forgotten in these novels. I also enjoyed that there was some sort of mystery within this novel to give the plot an extra push.

A Duke for Christmas

Charles and Isabella were friends growing up, even though Isabella was simply the daughter of Charles’ governess. Isabella has disappeared for many years and then she shows up one night at his doorstep, asking for help. Charles must consider his options, and worry about Isabella’s safety as his family members start to attack.

I also really enjoyed this story in the box set and thought of it as unique. Rarely do I see regency romance novels about a rich man marrying a regular woman, and I think that this is a topic that should be expanded upon. This story was also a bit longer, which gave the characters more depth.

Linton and Catherine were friends in childhood, but now they have drifted apart. Linton has a reputation for cheating people, and Catherine does not even want to associate with him. However, when she starts to court another man, Linton suddenly comes back into her life to warn her about him.

I also didn’t like this book as much as the others. When I read the novel when we find out what is wrong with Catherine’s current lover, I thought that it wasn’t a good reason for them to break up. Also, I didn’t particularly like Linton. Even if he tries to change his ways, I still thought of him as a cheat. All in all, the writing was fine, but I just didn’t enjoy the story.

I received a free copy of this book via Booksprout and am voluntarily leaving a review.

One thought on “Hearts and Ever Afters: Regency Romance Collection Box Set Review”