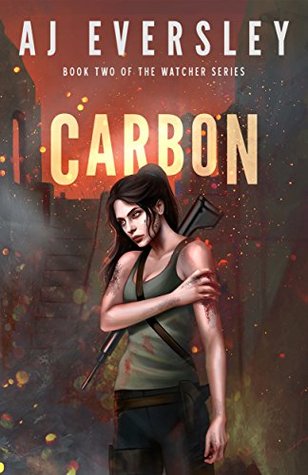 Sawyer is now a Carbon and is under Coleman’s control since he created her. Kenzie is also under Coleman’s control, as his arm has part of Coleman’s work in it. Sawyer travels to the United Isles with Max to try and find and find an ally, along with trying to heal her heart that was broken by Kenzie. The war for humanity continues, but it has just gotten more difficult as now the lines between human and Bot start to blur. Sawyer must come to terms with herself and her new powers, as she has become the one thing that she hates.

This story really amped up the character development. The action scenes were addictive, and Sawyer traveled a bit more in this book in my opinion. Sawyer really has to learn to accept herself but

My only real complaint was the inclusion of the love triangle within this novel. I didn’t absolutely hate it, but I did not see the real point of having Sawyer fall in love so quickly after Kenzie. I won’ t spoil anything, but the further I got into the story, the less sense it made to me. I was just really happy that the romance did not seem to COMPLETELY overtake the storyline. This was much appreciated.

I would recommend this trilogy to anyone looking for an in-depth YA dystopian novel.

I received this book for free, and this is my voluntary review.