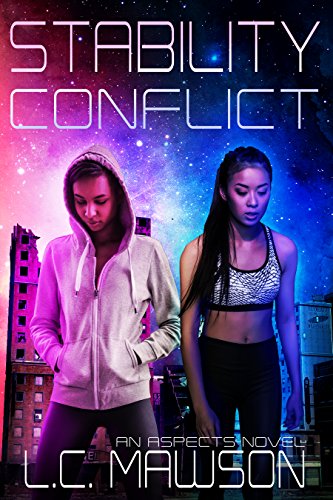 Claire has left the rest of the Aspects to live on the planet of the planet of the Rena with her sister Empathy. Her sister wanted to escape to a planet where her powers could be controlled so she could be herself. She also thought that her relationship with Hate was ruined and blamed herself for Hate’s injuries. While on Rena, she gets roped into Rena politics and starts to regret her decisions.

When Hate wakes up, she is horrified to find out Claire has left. Now she has an injured leg and injured kidneys, so she has to learn simple skills such as walking again, by herself. The other Aspects are also struggling in the aftermath of the attack.

This book was one of the hardest to get through for me but it was also the one where I saw the most growth in the characters. I felt exactly how I was supposed to feel with Claire and Hate separated. With the two working together in the past 3 books, I felt that something was missing as they were separated. This truly allowed each person to blossom in my eyes.

My favorite part of this story was definitely seeing Empathy grow by getting the chance to be in one body at a time. I also liked seeing Claire and Empathy grow closer during their time on Rena.

I received this book for free and voluntarily reviewed.