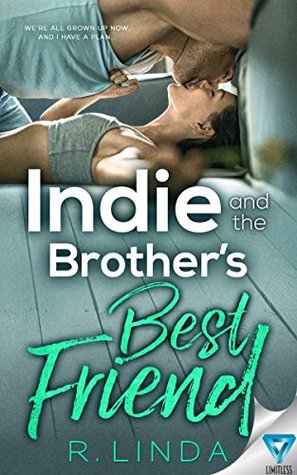 Indie has been in love with her brother’s best friend Lincoln/Linc but he says that he only looks at her as a little sister. She has to go with him to her parents’ second wedding, where they will be at a tropical resort. She is desperate for him to notice her before they possibly go their separate ways, so she and her friend Jack decide to pretend to be in a relationship to make him jealous. Hopefully, this plan doesn’t backfire completely and he will finally see her as more than simply his best friend’s little sister.

Linc has been in love with Indie for years, but he is scared of what her parents and brother will think if they start going out with each other. He does not want to ruin his relationship with his best friend, but he loves Indie so much that he doesn’t think that he can wait any longer for her. When she shows up at the tropical resort with a new boyfriend, he doesn’t even know how she has managed to date him for a year without him finding out. Nevertheless, he knows that he has to find a way to get her away from this horrible boyfriend of hers and to where she belongs, with him.

I am really into the falling for the brother’s best friend storyline now. It started with The Boy Who Sneaks in My Bedroom Window and now I am loving this. My only issue is when the brother tries to get mad at the best friend for liking the sister in the past. If I was a brother, I wouldn’t be hostile towards my best friend who wants to date my sister. Instead, I would want my sister to date someone who I trust. Nevertheless, the brother always has some degree of hostility that is the cause of a major plot point.

I loved Indie, as she never gave up on Linc even after years of pining after him and seemingly receiving nothing. It was sweet to see their relationship grow throughout this story and see how they truly blossomed into love.

Even though irritated me to no end with his “tactics” to try to bring Indie and Linc closer together, it definitely worked, and it helped for their growth as a couple.

Lastly, I am starting to see the link between the stories in the series. Before even reading the short sample at the end, I knew who the next story was going to be about simply by reading the novel, and in a weird way this made me feel special for “figuring it out”. I definitely cannot wait to read the next story, and I hope to follow this series until the end.

I received a free copy of this book in exchange for my honest review.