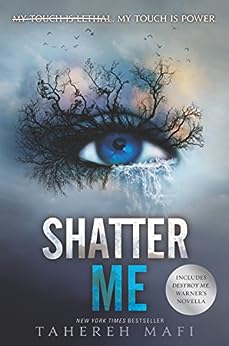 Juliette can kill a man with a single touch, and therefore no one has touched her for many days out of fear. Even her own parents stopped holding her as a child, choosing to treat her as a monster. Now, she rots away in solitary confinement in a jail for weeks, wondering when she will be able to come out. Then, Adam shows up. Adam, who she thought she would never be able to see again. Soon, she is swept away by a man named Warner, who intends to utilize her powers for himself.

I picked up this book because I had heard such good things about it, but now I have to question just a few of those things.

I heard that this story was a very intricate and beautifully written action-adventure novel. I read it, and I saw that besides having a lot of poetic phrases, most of the scenes weren’t actually all that detailed. I couldn’t see any of the places where the characters were, and for me, that means that the story took place with dreary colors and in dreary rooms.

Also, I thought that this story was going to be a great romance novel. Instead, it was full of insta-love. Adam and Juliette never really had a real reason to fall in love with each other. Even with their “backstory” saying that they secretly cared about each other, there was no reason for them to fall so deeply in love as fast as they did.

I do have to admit that the story was interesting. I loved how it moved so quickly, and the plot twists that occurred along the way. I will definitely be reading the next book in the series. Nevertheless, I would not recommend this if you definitely wanted a fantasy book free of tropes with amazing worldbuilding. If you want to read an average fantasy book that has a semi-addicting storyline, then this might be the book for you.

5 thoughts on “Shatter Me Review”