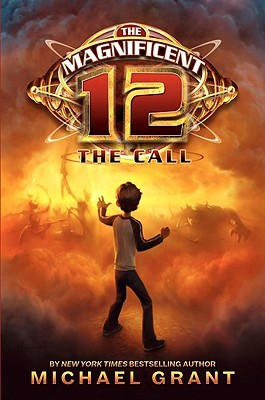 Mack is 12 years old, and he is just a regular kid with a BUNCH of phobias. When he is being attacked by the school bully Stefan, Stefan starts bleeding and Mack saves his life by calling the ambulance. Soon, a three-thousand-year-old man named Grimluk speaks to him in the boy’s room and tells Mack that he is the member of the Magnificent Twelve.  A Golem will take his place as he goes throughout the world and gathers the rest of the 12 in order to battle the Pale Queen’s daughter.

This story was a mess? I felt that it had been rushed, but  I can’t tell if it is the difference between reading it in my hands or reading it as an ebook. It jumped from scene to scene, and in between characters from the magical world to the regular world. Sometimes, I didn’t even know what is going on.

I also felt that this story was trying too hard to be funny. Some of the jokes seemed forced, so I would just think after a while “Can I get a bit of plot without some corny joke? Please?”

Lastly, this book seemed too short. It was 256 pages, but at the end I felt that it was kinda like “Ta-da, read the next book!” instead of actually being an ending.

I will say that this book is good for kids because I was absolutely crushed when I moved in the middle of reading the series and my new library never got the books. However, it is a very baby-ish book and now that I am reading it as 17 I see many of the plot mistakes.