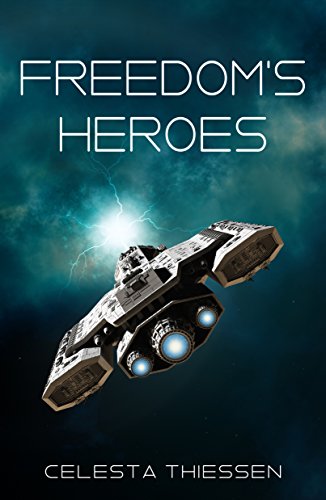 The prison ship called Freedom crash lands on a planet, and the inhabitants begin to build a world for themselves there. Fast forward 200 years and seventeen-year-olds Alistar and Sabel are betrothed in marriage to each other. On their marriage night, they must go on a journey and find out who else has crash-landed on their planet. Melody and her boyfriend Jake land on the planet. It is important for the citizens’ survival that no one else finds out about the colony, so Alistar and Sabel must take Jake and Melody back to their home. However, this means that Alistar and Sabel will never be able to return to theirs. Once they are out in the real world, they realize that the universe is on the brink of war and that it is not only themselves who need protection.

It has been a long time since I have read a Christian fiction novel, and I started to realize how much I had missed them. It is refreshing to see characters relying on a higher power, and to see angels in the mix of the story, rather than the normal teen fantasy story. The main plot was also interesting.

The only two issues I had with this story were the ship and Jake and Melody. The ship was supposed to be top-notch, but I felt like Alistar and Sabel spent most of the story fighting with the ship’s AI to make it do what they wanted. Melody was pregnant with Jake’s child, but they weren’t married. Then, Jake was forced to marry Melody. I think that this was the wrong way to go about things because Jake did not love Melody and she would obviously be hurt in this relationship.

I would recommend this story to anyone looking for a Christian sci-fi novel.