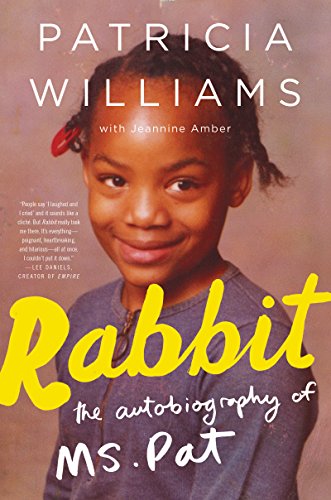 Warning, this book deals with abuse both physical, sexual, and emotional; along with some other tough topics. If you feel that these will bother you, then you might want to click off this review now.

Patricia Williams (aka Ms. Pat) was born in Alabama and raised during the crack epidemic of the 1980’s. Her mother was a drunkard who struggled to make ends meet for her five children. At first, Patricia or Rabbit lived with her siblings in her grandfather’s liquor house. Then, she lives in a tiny apartment with her mother who makes extra money by conning or robbing anyone she meets. While in elementary school, she is always hungry, but her mother keeps bringing around boyfriends that help them from time to time. One of them assaults her and her sister, but her mother never sees. At the age of twelve, she dates a twenty year old man who impregnates her. At fourteen, he does it again. By the age of fifteen, she has two children and she only has an eighth grade education. She knows that she wants to make money, so she turns to drug dealing.

I’m not going to lie, this story was hard to read. There were several points where I thought to myself, “Why am I even trying to read this?” However, it was an important book for me to read. While I am seventeen years old, in school and worrying about what colleges I have to apply to this week, she was on the street dealing drugs and trying to support her children. Even though her dealing drugs would not be considered a good line of work, the money kept her and her kids alive. She went through a lot in her life, and eventually she was able to come out on top. The most important part of the story for me was definitely seeing her taking in her sister’s kids to try to give them a better life than she had.

The biggest takeaway I had from this book was do not judge people without knowing their story. If someone had just seen her dealing on the street, they would not have known how strong she had been for so many years and how much she had gone through. They would have just seen a girl “going down the wrong path” instead of a girl doing as much as she could to make money for her kids.

I would recommend this book for anyone looking to read a story of survival from the perspective of a strong African-American woman in the 80s and 90s.

2 thoughts on “Rabbit: The Autobiography of Ms. Pat Review”