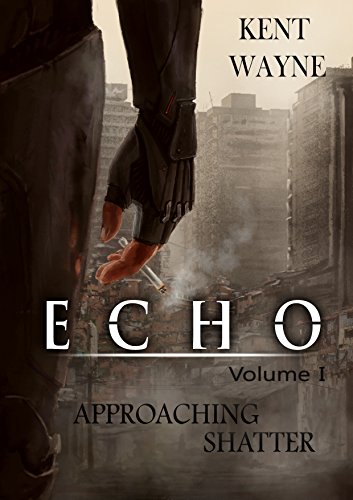 Thank you @Dirty Sci-Fi Buddha for writing this awesome story, and reminding me to read it through your blog posts popping up on my feed!

In this story, you find yourself thrown into the midst of a futuristic version of humanity. Earth has been abandoned due to climate change destroying most of it, and now humans live on Echo. Echo is a copy of Earth, but it is mostly inhabited by humans. Now, governments have merged, the Department of Enforcement was created to crush the Dissident rebels, and half of this planet is decaying as the rich live up in the sky where they can pretend to not see the chaos of Echo.

Atriya is one of these Enforcers. He follows orders and is a good soldier, but lately, he has been wondering what it is all for. He is strong, but he can’t help but think about the soldiers who have been permanently crippled as a punishment for not passing the training process. There are also the soldiers who aren’t worthy of their title, who tell wild stories in order to receive praise from strangers even though they were cowards on the battlefield. What finally makes him stop and think is speaking to his friend Verus, a priest for the church that follows the writings of the Judge. Atriya wants to break the cycle of darkness, but no one on Echo knows any other way to live.

I usually dislike stories based on a fictional military simply because they usually involve a lot of fighting without any thought. However, this book was absolutely amazing as it explores the ideas of human strength, war, and even how religious writings are interpreted. I enjoyed the action scenes, but my favorite part was being in Atriya’s head and seeing the broken world of Echo through his eyes, the eyes of a person who has never known hope.

My second favorite part of the story was hearing about the religion where people would listen to the writings of the Judge. My favorite quote was “other ministers used the Judge’s words to condemn and divide”. This really made me think about how religion would be perceived thousands of years into the future. Would people still be divisive, or would they accept each other and simply use religion as another way to come together peacefully?

I would definitely recommend this book to anyone who wants an action-adventure story with military aspects, and who also is interested in any story that can make you think about humanity in the future. My only warning is that some of the fight scenes are on the graphic side, but they did not make me feel uncomfortable.