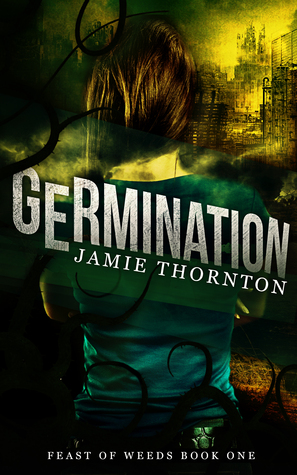 I received a copy of this book in exchange for my honest review.

Mary has been on the streets ever since her dangerously abusive family situation forced her to either run or suffer. She knows how to survive, and has met a few other kids along the way. Together, they have the tools in order to stay on the streets without having to put themselves in excessive danger daily. Heck, they have even been interviewed about it, not that any of the questions were worth answering.

But one day, when Mary and Gabbi are begging for money to pay for their monthly gym membership, a man holding something bloody in his hands comes on the street. Once they are scooped up by the police, who are terrified of the man, the girls and their friends are swept into the world of infection, unknown territory.

This prequel to the Feast of Weeds series is short, sweet, and to the point. I enjoyed it because it gave me insight on the lives of almost every single character, before and after the conflict of the story occurred. It has me very interested in the world in which they live, as I want to know where these infected people are coming from. I only wish that I had more books in the series, so that I could continue the story and find out what happens to Mary and her friends. Overall, it is a very well-written novella, which I have discovered is sometimes hard to find. Many people overdo it for a short prequel, confusing me and turning me off from the rest of the series, but I am very excited to read the rest of the Feast of Weeds series due to the world-building of this novella. I would recommend this to anyone looking for a new adventure series with characters who aren’t born heroes, but instead made heroes.

One thought on “Germination Review”