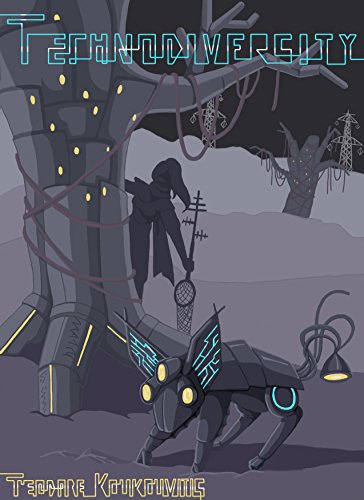 Rem lives in a world where it is the humans against the tech. She is a texplorer, meaning that she goes into the wilderness where all the techbeasts are, harvests them for their parts, and then takes them back to Mount Offline or where the humans live. It is the law for at least one person in every family to be a texplorer, and her older brother and sister have both died from texploring. If she doesn’t succeed in this field, then her mom or her sickly father will have to take up the trade, and they are sure to be unsuccessful.

But this is harder than it seems. Rem is named after the famous Rem of the Hologram Valley, a woman who taught the humans to look up to the “hell-space” and talk to the gods. Now, almost every man or woman is named Rem, and each person with that name hopes to live up to her legacy. However, Rem of the Recycle Canyon does not enjoy texsploring. She feels bad for taking apart the creatures, feels as if she is actually killing something that can live and think.

When exploring in the Tech, she meets a strange man who doesn’t kill the tech but instead lives with them. He teaches her how to ride a horse/bull like tech creature, and how to survive some of the seemingly dangerous techbeasts. Now Rem has to decide whether or not to believe that the tech are living creatures, and what to do so she can save them.

I loved this book. I hadn’t read anything like it before, and it felt so full. I felt, unfortunately, that it was a tad slow in the beginning, but I was reading it during a time where I could barely read a couple of pages a day. Then, I literally read half of the book in about 2 hours, with just enough time to spare for another one.

The world that Rem lives in is a matriarchy, which I don’t see that much in books. The women run everything, the most celebrated texplorers are almost all women, and the women living on Mount Offline are independent and powerful.

I loved the pacing of this book, even though I felt that it was slower in the beginning. The buildup actually proved to be crucial to the story as when she was going on bigger adventures in the end of the book, I was able to understand and remember everyone from the beginning. Which, if you know me, is hard for me to do.

Altogether, I loved this novel. I would recommend this to anyone who is looking for an action story, an adventure story, a fantasy story, a sci-fi story, just ANY story. Heck, even the first person POV counts as comedy! Just read this if you are looking for an amazing story written by Theodore Koukouvitis.