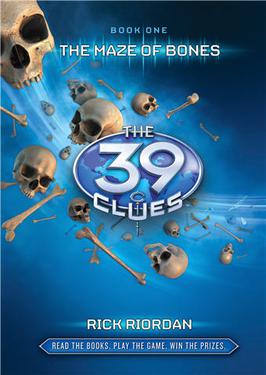 The 39 Clues is yet another series that I used to read quite a lot when I was younger. I loved hearing about Amy and Dan, two orphaned kids in a powerful, rich family, going all over the world to collect clues and solve their family’s great mystery. After not reading the series for over 4 years, I barely remember any of it. So this summer, I hope to get through a good portion of the series again.

The Maze of Bones is the start of the hunt for the clues. Amy and Dan are orphans who live with their horrible Aunt Beatrice who simply gives them nanny after nanny and makes their lives miserable. The only good in their lives family-wise is their grandmother Grace, who lives in a mansion, and their new au pair Nellie, who barely watches them and is generally a cool person. When their grandmother Grace dies, they are invited to a funeral with a bunch of their estranged family members, people who never cared about her and only hope to get some of her money. But instead of giving them a normal will, they are offered either 2 million dollars on the spot, or the chance to be a team in some intricate scavenger hunt where they have the chance to gain a lot more than just 2 million dollars, or the chance to get nothing at all. Since Amy and Dan have nothing to tie them down and know that their aunt would just take their money, they burn the cash and decide to go on the hunt, hopefully to a better life.

Amy and Dan are immediately thrown into a deathly race against their rich relatives, where they learn that their family has been split into 4 different groups and that they must find some of the 39 clues in order to win the race. While they race against the others, traveling from Pennsylvania to France, they learn that their parents may have been more than they seemed, and that more lies inside of them than they could have ever known.

I loved this story so much as a kid. By going back to the beginning, I really don’t like Amy and Dan as much, simply because I was used to seeing them at the end of the series where they had developed much further. However, I did enjoy going back to their roots, when they were clueless kids put into this spy mission type of world, against family members from all backgrounds, and all they had was each other and Nellie to help them. I would advise anyone who hasn’t read this series to do so, but not to judge the first couple of books because there is definitely much more to come down the line and it is a very well done series altogether.

2 thoughts on “The Maze of Bones Review”