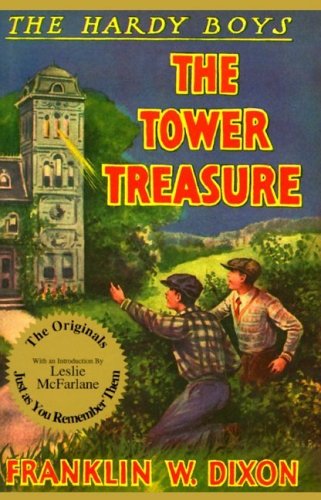 Frank and Joe Hardy, 16 and 15 years old respectively, ride their bikes down the road for fun when a driver with red hair in a yellow car almost runs them over. The car looks a lot like their friend’s car, and when they go to speak to the friend about it they find out that his car was stolen. Frank and Joe, who’s father is a private detective, go to the police station in order to report the stolen car, and to report the reckless driver incident. While there, they find out that a man has been committing a few robberies around town, but no one can agree on his appearance. Then, after they find the yellow car abandoned, one of the town’s rich residents claims that he had things stolen from his house, and when one of Frank and Joe’s other friend’s father is blamed for it, the boys know they have to do something to clear his name.

Unlike the Nancy Drew original book, this book did not have any instances of racism that I could see. I cannot claim for the rest of the Hardy Boy’s Originals series, but this book didn’t have any. There was some split between the male and female characters in the story, as none of the female characters were actively involved in the mystery, but there was nothing overly sexist, and anything that was outdated could be brushed off as just being the 1920s culture as it wasn’t that offensive. This book was truly just a nice clean mystery with two brothers who wanted to help out a friend. The middle may have been a tad slow, but with only about 200 pages in the whole book nothing really dragged the story down to a crawl. I would recommend this book to anyone who wants to see the original Hardy Boys, and to anyone who simply wants a good clean mystery.