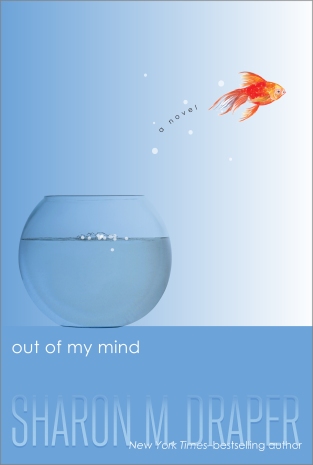 This story is very close to my heart. I read it first when I was still in middle school, and now that I am in high school and rereading it I noticed a lot of things that I had only glanced at when I read it the first time.

Melody is an 11 year old genius girl. She can remember documentaries just from watching them one time, she can read thousands of words without anyone actually teaching her how to read, she can learn to speak multiple languages, remembers things from when she was less than a year old, along with many other things that she is teaching herself to do.

However, no one knows of these things because Melody cannot speak. She was born with cerebral palsy, and cannot do many things on her own. Her parents have never heard her say a word, but her mother believes that she has potential. Sometimes, Melody has what she calls “tornado explosions” when she gets fed up with her body for not allowing people to understand her and she simply starts jerking and screeching, but everyone else thinks she is simply being a brat and having a temper tantrum.

Before she was two years old her parents treated her like a baby that was disabled. They never tried to teach her how to sit up or roll over and just assumed that she would simply never be able to. Then a supportive neighbor named Mrs. Valencia who offers to babysit Melody, but she never treated Melody like a disabled child. She taught her to roll over in case she fell out of her wheelchair, helped her learn things through documentaries, and fed her food such as soda and regular food instead of baby food and juice like her parents did. Melody loved her time there, and Mrs. Valencia helped to give Melody her first word board where she could communicate with other people by tapping her thumbs on the words she wanted to “say”.

When she was 5 she beat in her mind the doctor that attempted to give her an IQ test, but the doctor was convinced that she would not be smart and that she would not thrive in a school setting. Her mother refused to believe him and put her in the Special Education program at the local school, where she went through a variety of teachers, some who wanted to challenge the students and some who believed that they were all babies who could not learn. Then the school decides in 5th grade that they would start inclusion classes and then Melody’s world is turned upside down.

This book is very good for all ages and gives anyone who reads it a totally different perspective on the people they see that may have some sort of physical or mental challenge. I love that the book never made Melody into a weak or useless character, she was just always battling with her own body and brain. Mrs. Valencia was truly a hero in the story as she helped others to see how amazing Melody could be, including Melody’s own parents. I would recommend this book to anyone who has not read it yet.

8 thoughts on “Out of My Mind Review”